So Others May Live 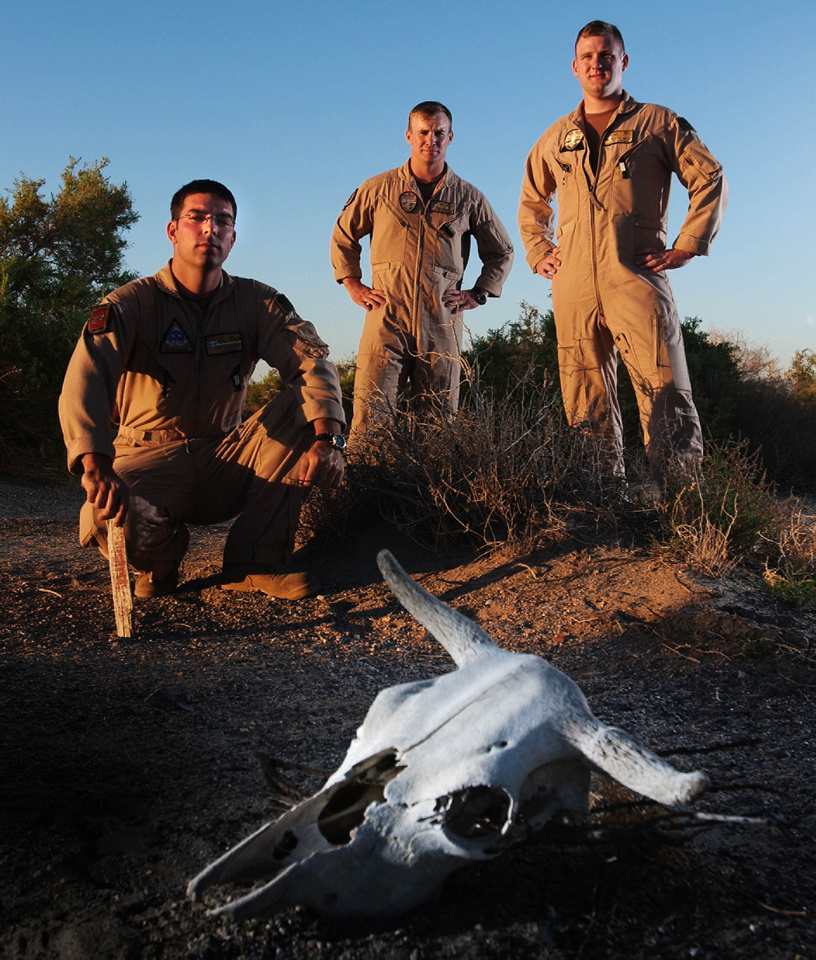 Their home is in the middle of the desert surrounded by some of the most extreme landscapes in the Western United States. Visitors flock to this region by the millions every year to enjoy the snow-capped mountains in the nearby Sierras and hike, hunt and fish in the desert valleys that surround this remote base.

This varied geography makes the daily routine of the search and rescue (SAR) team at Naval Air Station Fallon, Nevada, anything but routine. It is often just as exciting as the recreational activities of the thrill seekers who come to play in the unforgiving region.

“People pay good money to do things less exciting than what we get to do for our job on a daily basis,” said Aviation Electronics Technician 2nd Class (NAC) Sean Lawson, a six-year search and rescue aircrew veteran and crew chief for the distinguished “Longhorns.” 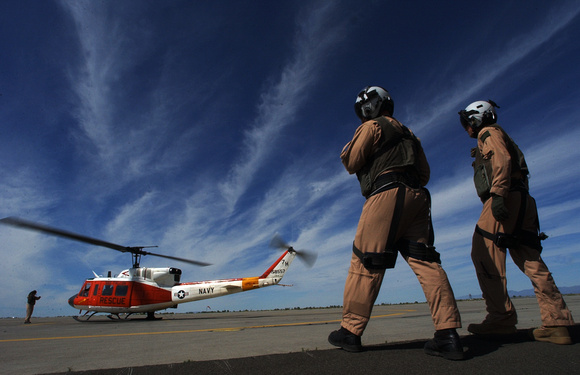 All in the name of saving lives, they fly in some of the most challenging conditions in the Navy, where operating near 10,000 feet is not uncommon. To top it off, they reach that altitude in what can be called the Volkswagen of helicopters, the HH-1NHuey – a Vietnam-era workhorse.

Yeah, it’s tough duty and dangerous at times, but the pilots and crew, who count themselves as being fortunate enough to call these orange and white rescue birds their office in the sky, wouldn’t have it any other way.

“I’m into extreme sports, and this is pretty much the extreme job,” Lawson added.

But that word, extreme, is not thrown around that much inside Hangar 7 of the desert-locked naval air station just east of Reno, Nevada. The SAR team would rather refer to what they do as “varsity” flying, because of the level of skill and concentration required for safely completing their mission.

“There is no other helicopter flying in the Navy more varsity than what you’ll find here in Fallon,” said Aviation Structural Mechanic 2nd Class (NAC) Dustin Wiggins, who has been in aircrew SAR for more than six years. “We start out at 4,000 feet above sea level and go up. It’s hard for other commands to compare, because most start out at sea level. When we take off, we already have a mark against us.”

Operating in these demanding conditions requires the most out of every member inside the helicopter – especially the enlisted crew. The flying is so difficult at times, that it is often referred to as getting a master’s degree in helo flight for these aviators. Once they get into a hover though, it’s all about the aircrew.

“From what I’ve seen, the teamwork is more extensive here,” said Lawson, “because 90 percent of the job is done by the crewmen.”
No one can stress that fact more than the pilots, who are at the controls of the base’s three Longhorn birds and depend on the expertise in the back seats to keep everyone out of harm’s way.

“They are my eyes and ears in the back,” said SAR Team Leader Lt. Cmdr. Theo Kulczak, a 20-year veteran pilot. “I trust them 100 percent to keep the aircraft in a safe position. When they tell me move left, I move left. I’m just driving the bus. They’re putting it where it needs to go.”

There are many times when those crewmembers need to get into some confining places to pull off a successful rescue. They do so though with the utmost respect for the terrain and understanding of safe procedure. 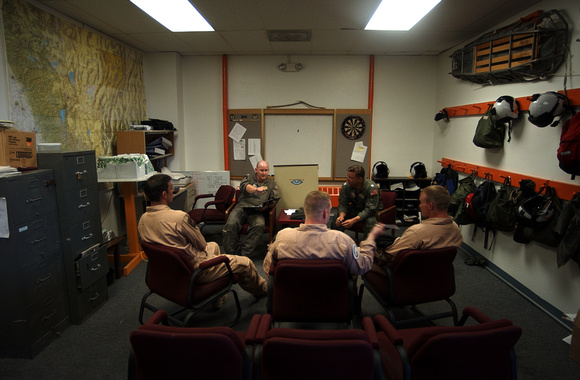 “We are going into places that are tight,” said Kulczak, “where inches mean success and power is critical.” So crucial in fact, every crewmember has charts to calculate power before entering the rescue location. “Out at sea, it is primarily done by the pilots,” he added, “while here, both the pilots and crew calculate and then compare notes.”

What can be so important to cause these SAR crews to push the envelope virtually every time they leave the ground?

Despite their primary mission of rescuing downed military pilots in the vast bombing ranges that surround the base, most of the search and rescues are launched for the civilian population.

NAS Fallon is located near the picturesque Sierra Mountain ranges of California and Nevada – home to some of the best skiing, hiking and outdoor exploration areas in the nation. And with that terrain, comes lost hikers, injured climbers and downed skiers who find themselves in need of being plucked off the sides of mountains where the average rescue crews can’t reach.

The Longhorns have the distinct capability to hoist their victims from harm, and because they are able to do so, they get called fairly often – a fact that also separates them from their counterparts out at sea.

“You might get one real SAR flight during a sea tour,” said Lawson. “Here, I got around 10 in my first year at the command. If you’re flying, you’re working.”

Even on what can be considered a mundane flight – just over the nearest mountain peaks – pilots and crew must calculate everything from the winds, the heat and the elevation, among other factors, all before they preflight the bird for launch.

Once airborne, some rescue flights push the limits so much that the crew must land and make safety adjustments to remove all unnecessary weight to go higher, including leaving behind doors, extra gear or even a crewmember. 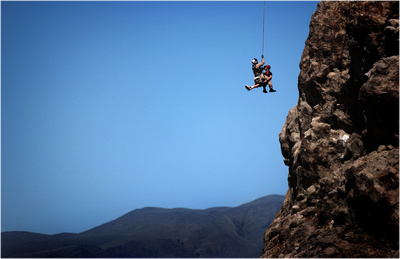 “There are times at take-off when it feels like we are already at 7,000 feet with the thin air and heat, while a majority of fleet pilots operate at 1,000 feet and below most of the time,” said Kulczak.

It can be said it takes a special breed of person to do this job, or at least someone with the right drive and dedication.

“Some people are born to do certain things,” said Hospital Corpsman 2nd Class (NAC/FMF) David Clipson, SAR corpsman. “The biggest thing you need here is desire. You have to be confident with what you know, and you live with the fact that your next mission could be your last.”

Now, these highly-trained Sailors aren’t some death-seeking, thrill junkies looking to push the envelope beyond its reaches, but they do know that the nature of their job means they must have a keen understanding of everything in the helicopter.

For the corpsman, that not only means he must know his medical profession well, but that he also has to be as technically sound on aircraft operations as an air crewman.

“That’s the challenging part of the job,” said Clipson. “Until the helo and crew are on the ground safely or the aircraft is in a safe flight regime, I have to focus on flying and medical care.”

“To me, the patient care is the easiest part of the job, because we train for it so often that I don’t even really have to think about it,” added Clipson. “It’s as if I am on autopilot.”

When flying though, there is no autopilot. Every crewmember must be in tune with what they are doing as well as what the others are doing.

“We feed off each other,” said Clipson. “When somebody talks, I almost know what they are going to say. Even the tone of their voice tells the rest of the crew something. When you have a thought, someone else can help you finish it. We balance each other out.”

This Longhorn crew trains and works together so much they joke that it’s almost like a marriage. 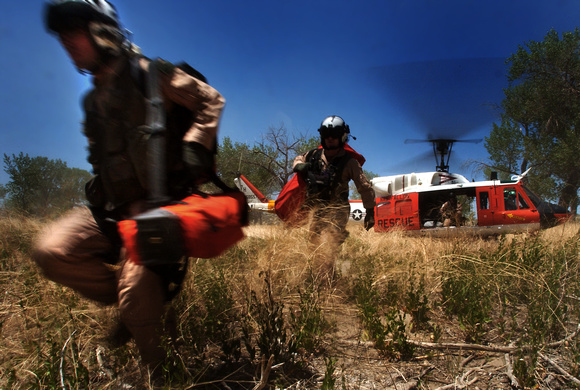 “Sometimes it’s even better than a marriage, because you don’t have to go home with them at night,” said Clipson with a smile. “But seriously, our lives depend on each other almost more than in any other relationship.”

When flying in conditions that few helicopter crews in the Navy must face, teamwork is essential.

“You trust the other members of your crew implicitly,” stressed Lawson. “When the aircraft is within inches from rocks and cliffs, and any slight movement in the wind or helicopter can be catastrophic, you learn to depend on and trust everyone’s training. Here, the difference between a good day and a bad day is very small.”

The teamwork and pride of the Longhorns rivals any in the Navy. Theirs is a unique bond, created by the unforgiving nature of the job and a desire to ensure their legacy for excellence is maintained for a long time to come.

“When I first got started in this job, it was all about, ‘Man I’ve got a bad-ass job where I am able to save someone’s life,’ but now it’s all about passing the experience and knowledge to those who are just getting started,” said Clipson. “I want to maintain and improve the standards and goals I’ve set for myself and everyone here at SAR.”

So others may live.