Outside of the chapel, the religious program specialist plays the unfamiliar role of bodyguard to the chaplain ... especially in a combat environment 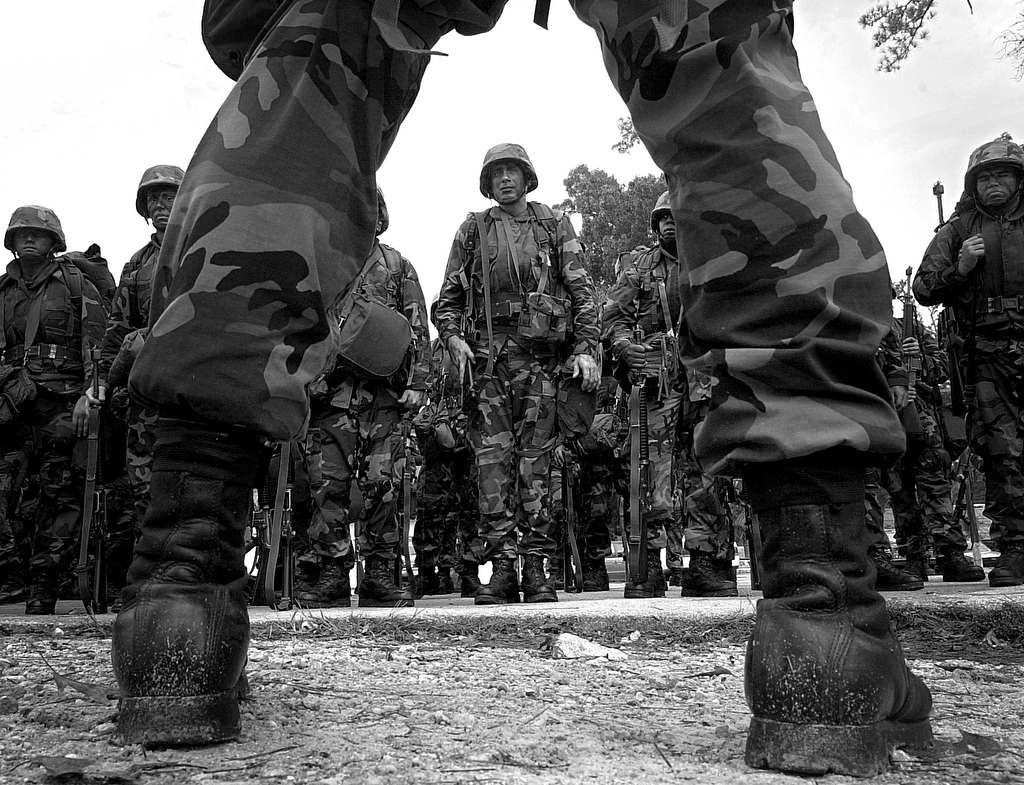 Their hearts pound while their thoughts and bodies run a mile-a-minute as the snap of gunfire, coupled with the brain-jarring explosions go off just feet away. They must navigate their way through clouds of colored smoke that possesses the distinct stench of rotten eggs as they are barked at to, “Get down and kiss the ground!” Toting an M-16 and their religious ministry combat worship kit, they crawl, run and then drop to a crawl again, slithering their way to a safe haven – on the other side of the tree.

As they roll into a makeshift bunker, they hear someone running their way, shouting “where is your chaplain? You had better get her! Get her head down! Do you want your chaplain to die? Why are you standing? Get your butt down! You had better kiss that dirt!”

Minutes – no, seconds later – the enemy comes out of a break in the woods, flanks their position and takes out the chaplain.

At that instant, a sense of fear sets in. After thinking about what just happened, an overwhelming sense of guilt consumes the religious program specialist (RP). He has let his unit down. He was unable to complete his mission. He was unable to protect his partner.

But before it gets too intense, the instructor provides some "divine intervention,"and revives the chaplain, telling the team to continue on and learn - after all, this is a training environment and these students are bound to make mistakes.

CREST is the first training to offer RPs and chaplains the opportunity to work together as a Religious Ministry Team (RMT) with the intent of developing the skills needed in the field.

"We're Sailors, but we need the training to function effectively when working with Marines," said Holdren.

CREST gives a direct pipeline to the Marine billets regardless of gender. In the past, men attended the Marine Combat Training course at the Marines' School of Infantry, while very few women had the opportunity to attend Field Medical Service School (FMSS). But until CREST, neither men nor women received Religious Ministry Team training with the chaplains, nor did they receive training on their role and professional responsibilities in support of Marine and amphibious forces.

A seven-week field-training course, CREST was introduced in February 1997 as a direct result of the Gulf War. The Chief of Naval Operations and Commandant of the Marine Corps felt it necessary to address the need for ministry to Marines and Sailors who endure the mental and physical rigors present in the field environment. They wanted to ensure chaplains and RPs were adequately prepared for assignments with Marines, particularly those in operational units.

According to Holdren, this schooling is only a snapshot of what will go on in the field; if students think they'll be fully qualified to function in an expeditionary environment when they finish, they're wrong. Each chaplain and RP is reminded from day one, that this is base­ line training and they need to build on their training. By coming together as a Religious Ministry Team, everyone learns better and more effective ways to provide ministry to the men and women of the Fleet Marine Forces, Naval Mobile Construction Battalions and the Naval Fleet Hospitals.

Students enter the course at Camp Lejeune, North Carolina, to learn combat survival skills and how to meet the religious needs of the Marines, while paralleling the long-established Field Medical Service School (FMSS) during portions of their field training. FMSS has long taught Navy corpsman the proper techniques and skills to survive in a Marine unit. 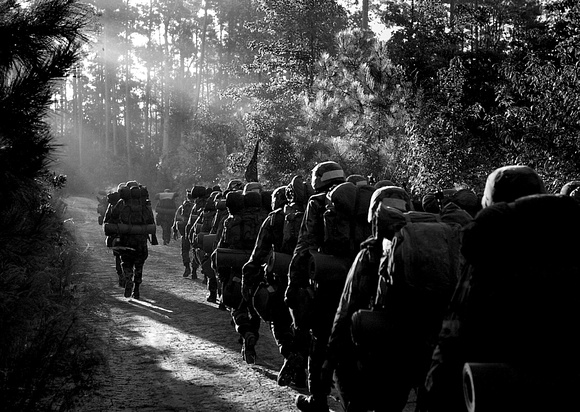 Here, the Sailors work out like Marines, march like Marines, and basically live and eat like Marines to gain a better under­standing of what their "customers" go through. And for 14 crucial days of their training, the RPs team up with a group of student chaplains and work on the RMT skills that are so vital in the field of combat.

While observing the training provided to the chaplain and RP students during a week-long, cumulative field exercise near the end of the course, the Navy Chief of Chaplains Rear Adm. Black, Chaplain Corps, remarked "CREST is the vital and sustaining link in our ability to support Marine Forces throughout the world."

Chaplains and RPs are purposely put through experiences they may not see in the field, or may not be responsible for.

Because of today's hostile world climate, they may come across situations where a peacekeeping scenario has turned bad, creating a necessity to perform duties out of the ordinary.

"Both of us have our own things to do while in the field, but if we're not working together as a team, we're done:' said Religious Program Specialist Seaman Paul Skovranko.  "You almost have to be like a married couple and know each other's moves and thoughts."

"This training reaffirms that chaplains and RPs are a strong team, and that makes me feel more safe and confident with the RP's ability to protect me," said Chaplain (Lt.) Judy Malana. "I trust my life to the RP, and that really hit home in the exercises when we were in the dirt and mud." 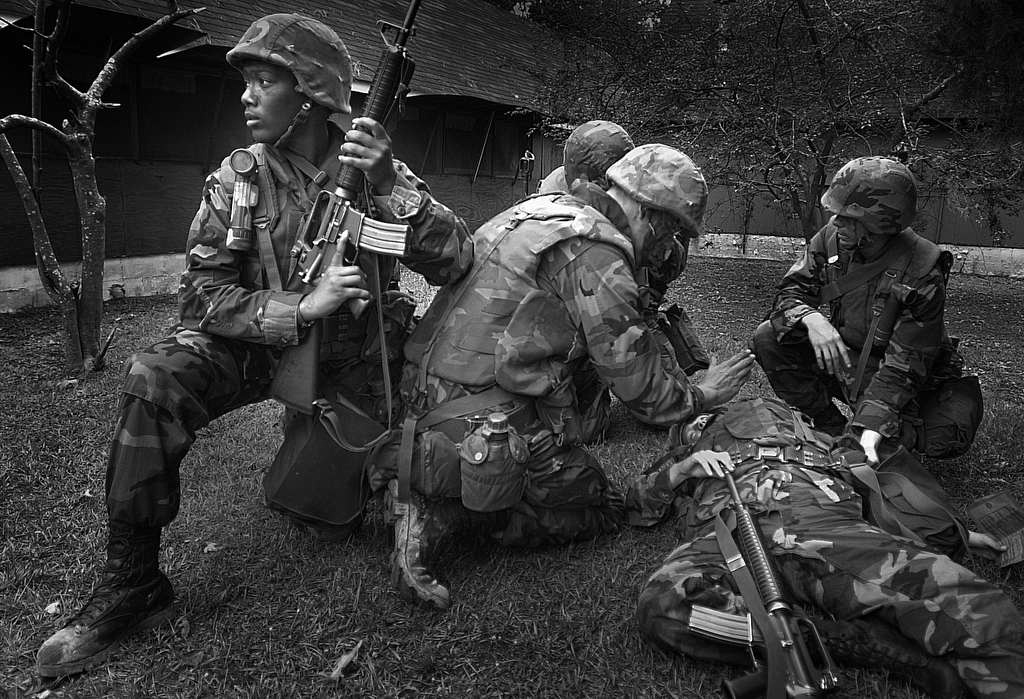 According to Religious Program Specialist Second Class Curkeena Mason, the field instruction at CREST reinforced the role of the RP during the Chaplain's ministry to the troops. It also reinforced the importance of RP and what it takes to protect their chaplain during that process. "You have to be strong and willing to die for your chaplain,"said Mason.

Unlike other fields in the armed forces, the Chaplain Corps is unique. While in the field, the RP must be in control when ii comes to safety.The chaplains are non-combatants and don't carry a weapon, so it's essential for them to trust and follow their RP's direction. 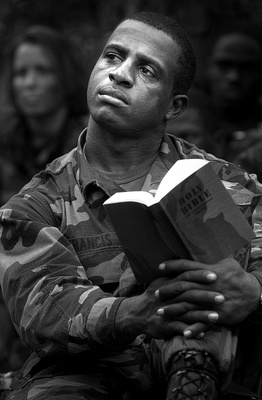 "If the chaplain doesn't listen to what I say while in combat, we'll both be in a lot of trouble," said Religious Program Specialist Seaman Susan Pitterman.

To some officers it may be difficult taking orders from an enlisted, especially when those orders are coming from junior Sailors who have been in the Navy for less than a year.

"If I remember I'm a pastor first, it won't bother me to take orders," said Chaplain (Lt. j.g.) Wesly Modder. "The emphasis should be that the RP is not a secretary, they're my bodyguard, my teammate:'

Many Sailors overlook the role of the RP, and don't realize how important their responsibility is to the chaplain and the Command Religious Program. RPs are an essential key to the overall effectiveness of the chaplain providing ministry to the troops. "I have always seen the work of RPs as an extension of the chaplain," said Malana. "A lot of the troops feel more comfortable coming to the RP, so it allows the team to reach more of the command."

And that is exactly what this school is about giving the team the skills, both mentally and physically, to work alongside our fellow sea-service. According to Chaplain (Lt. Cmdr.) Michael Orr, CREST Director, "The goals are simple; to stay alive in combat/expeditionary environments; and to hit the deck running as an asset to the Fleet.”