Where would the Navy be without the deck seaman 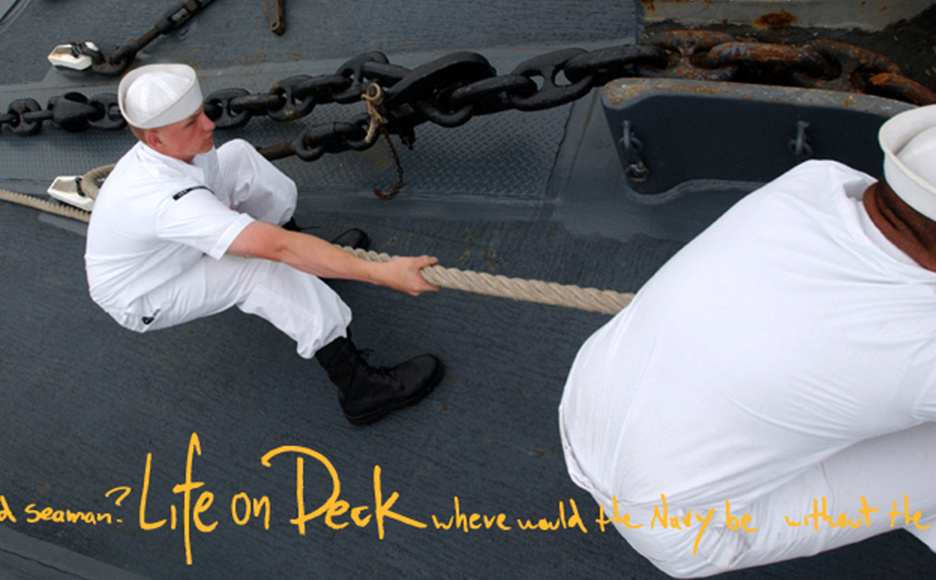 This isn’t an easy job, ” said Boatswain’s Mate 2nd Class Marlon Huff, assistant deck leading petty officer aboard USS Yorktown (CG 48). “You just have to expect to work.” It doesn’t get any clearer than that. The bottom line is that the deck department are arguably the hardest working group of Sailors aboard any ship. As a matter of fact, you can see them laboring from sun up to sun down. No, make that sun up to sun up.

Their duties have them roving the outer shell of the ship at all hours, doing anything from swabbing the decks just after morning quarters, to being called away for flight quarters in the middle of the night.

And who is the Sailor who keeps this band of brothers’ back from breaking? None other than the undesignated seaman.

A rookie of sorts and just like your favorite team’s newcomer, this Sailor is assigned the jobs no one wants, and he or she doesn’t have that big-dollar contract yet to make it all equal out.

So what keeps these Sailors going?

The fact of knowing that in today’s Navy, like in that of the past, a hard charging Sailor with conviction and a strong work ethic will not be left behind; rather, will gain something a little different than those who have chosen a separate path. Unlike many other rates in the Navy, the folks in deck department truly gain a truly deep understanding and respect for the meaning of hard, physical work and what that does to a person’s character and soul. 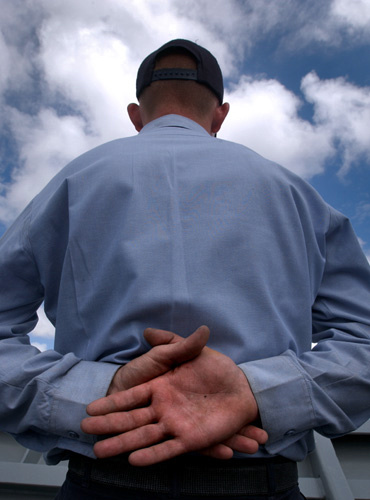 It’s not like they’re working in rocket science – and they know that – but without their back-breaking, sweat-draining efforts, where would the ship be?

Most definitely, it would still be parked pier side, looking like some old tin can in a rusted out junkyard.

There’s no way a true deck department Sailor would allow that to happen.

“The first thing people see when they come to the ship is the ship itself,” said Huff. “And when they cross the quarterdeck, they see the hard work that deck division puts in, and that makes us feel proud.”

So who is the person behind the broom; the junior Sailor on the aft watch lookout; the seaman who didn’t really know what he was getting himself into when he crossed the brow to check aboard his first ship?

It’s Sailors like Seaman Recruit John Ford Jr., who make up the spine of this department.

His story, like the many others who have come before him, is pretty common. He came from a small town, in his case Lowndes County, Ala., and wanted to make something of his life. He’s no stranger to hard work. Before joining the Navy, he toiled in construction, framing houses for $450 a week. Now he makes about that much every two weeks, but then again, he is just a rookie on this team. With time, he’ll work his way into a higher pay grade with more responsibility.

He’s not at that old “9-to-5” job anymore either. Deck’s days are a little longer; starting around 6 a.m., sometimes 4 a.m. if the ship movement requires it, and finishing … well let’s say they never really finish. Yeah, Ford will hit his rack in the evening, but if flight quarters are called away, he, along with the others in his department, must stand the watch. As everyone knows, the infamous Mr. Murphy is always around the corner, ready to make life a little more difficult.

It’s safe to say that life in the Navy and on a ship is a lot different than Ford thought it would be. “I thought we’d get eight hours of sleep a night, but I haven’t seen eight hours since I was indoc.”

Even though this job may sound like a major pain in the butt to some, for those in the thick of things, it’s rewarding knowing that being part of deck department means you are trained in many facets of the ship and can face anything the Navy can throw at you. 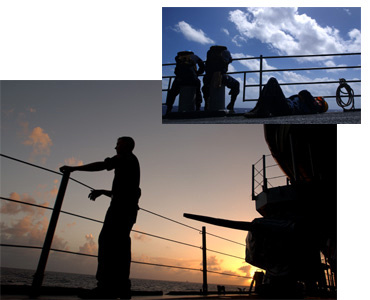 “I’m always hearing how we work in the heat and bad weather, and how it’s unappealing work, but to me, that’s what makes this job so challenging,” said Huff. “If you are able to stick it out here in deck department, I believe you can make it anywhere. It shows what kind of person you really are.”

This message is not lost on the newest players of the team either.

“I knew it was going to be hard work and all that, but it’s not as hard as people said it was going to be,” said Ford. “It’s not like a regular job where you can just quit,” he added. “Here, you have to gut it out at times.”

“I believe there is an advantage for the young Sailors who choose to come in undesignated and have a chance to see firsthand what the other jobs in the Navy do,” said Huff. “Going to school right out of boot camp and not having any other choice than the one made before joining the Navy can make some folks a little disappointed with their job.

“For a guy who’s looking to strike out of deck, the more he’s qualified for looks better in front of the board. It’s important to do your best and take advantage of every situation you are in so you can continue to succeed throughout your career, whether it’s in deck or not.”

Everyone has been the low man in the shop and stuck with the unappealing jobs. Other than the port visits, the “cokin’ and jokin’” throughout the day and the sea stories about their ships’ missions, no one has fond memories of their time doing the grunt work.

After all, how many times do you remember writing home about compartment cleaning or laying non-skid. Rather, it’s the exotic port visits, the fun times with friends and the added responsibilities the chief assigns to us as junior troops that makes us and our families proud.

“There is a lot of responsibility placed in the hands of a young 17- or 18-year-old,” said Huff. “There are a lot of late nights and early mornings, especially underway, so it’s important to be flexible. You could get called away at any moment for a man overboard or flight quarters, any time of the day or night, and if you’re not prepared, you can either injure yourself or a shipmate.”

Today’s seamen seem to have what it takes to accept these responsibilities and take care of business. They are goal oriented and prepared to face the hard work head-on in order to succeed.

“The difference between me and Ford is that he knows early on what he wants to do. Because of that, he is able to work toward his goal much easier,” said Huff. “Today’s younger recruits seem to have that direction a little more than when I was in their shoes,” he added. “[If a Sailor] knows what he wants, it makes my job easier helping out with his goals.”

And that’s what it’s all about. Molding and developing young troops into productive, happy Sailors, who will turn around and lend a hand to the next generation of undesignated seamen in Tomorrow’s Navy, because they served in their deck shoes today.

“You’ve got to be proud of what you’re doing,” said Ford. “We’re protecting people’s freedom and most people don’t really know what we’re doing other than that.” 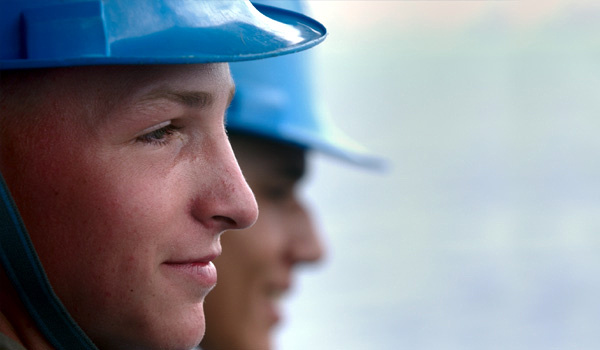