OAKVILLE, Iowa -- First arrived the sense of inevitability, as rain and floods hit upriver of this Louisa County town, population 439.

Then came the volunteers.

"They poured in from Connecticut to Kansas," Bob Lanz says of the hundreds who joined local residents in evacuating livestock, moving stored grain and battling the rising waters of the Iowa River by raising the levee near town with sandbags. "There's few of us here, you know.

SLUG: NA/OAKVILLE
DATE: 6/22/08
CREDIT: Preston Keres / TWP
LOCATION: OAKVILLE, IA.
CAPTION: The town of Oakville, Iowa, is all underwater as the Iowa River broke through the town levee. Here, the Iowa River (R) usually floats right past the town of Oakville, Iowa, but the heavy rains in the middle of the state caused the river to overflow the levee North of town and flood the town and surrounding farm land.

We couldn't begin to have done it by ourselves."

The effort eventually raised the levee several feet, for miles, as far as the eye could see. "Every time I looked up, I cried," recalls Lanz, tears welling in his eyes, voice beginning to crack. "Just to think that people were putting out that effort . . . for us."

The last time floodwaters swamped Oakville was 1946. Even the record floods of 1993 proved no match: The water didn't reach town.

But last month, the levee broke.

Water rushed through the middle of town and the surrounding farmland, taking 21,000 acres of new crops, about 3,500 of which the Lanz family farms itself. Every house flooded. The town was evacuated. 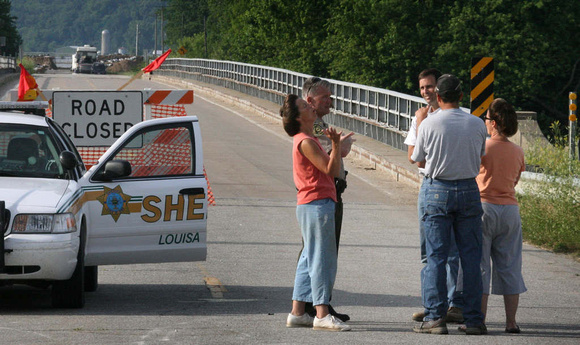 Bob, 71, and his elder brother Ed were born and raised here. There's Bob's current house on River Street on the east side. And the white house with the red roof over on Lynn Street, where they lived as young boys. A farmhouse a mile north and down a gravel road is where Bob raised his three boys and daughter, who still call this valley home.

For two weeks, few folks were able to get to their homes; most were kept a few miles away, behind a sheriff's checkpoint, for safety, while agencies assessed the damage. People used to staying busy confronted long days with little to do but question their fate.

"As the time goes on, we'll see the light at the end of the tunnel," Lanz says of the frustration, the challenge ahead. "Right now, I guess the light's been turned off, but we'll go on."