24 Seven: On Duty On-the-Hour Every Hour

Short stories about some of the U.S. Sailors who keep the Navy running around the clock. 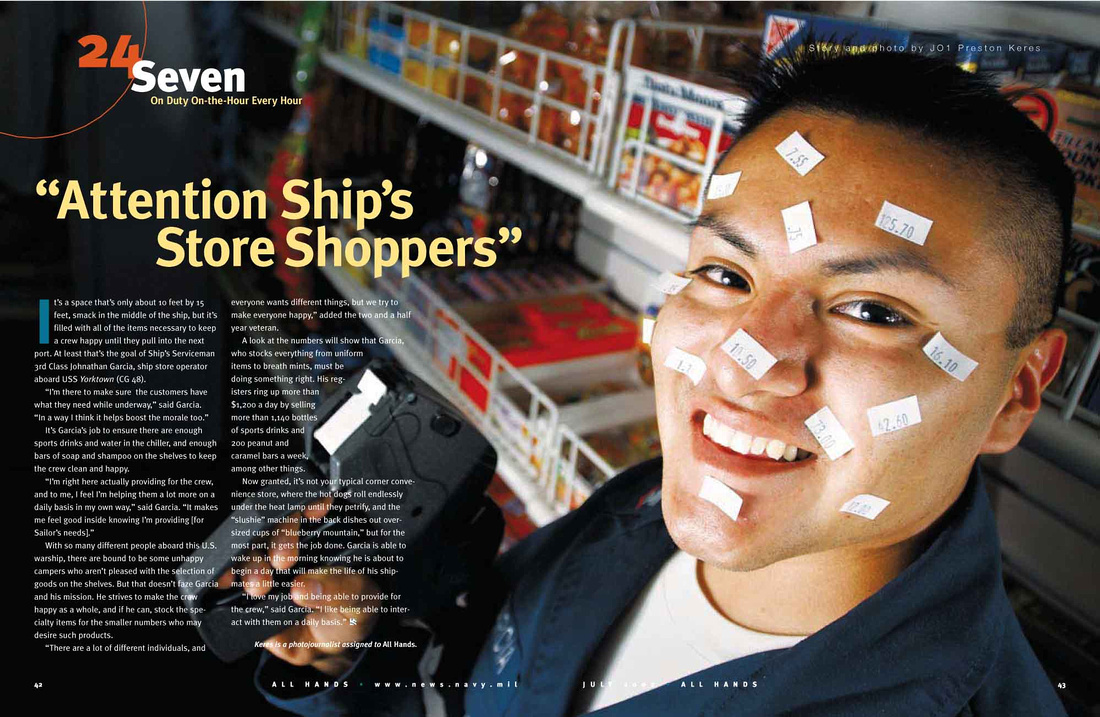 It’s a space that’s only about 10 feet by 15 feet, smack in the middle of the ship, but it’s filled with all of the items necessary to keep a crew happy until they pull into the next port. At least that’s the goal of Ship’s Serviceman 3rd Class Johnathan Garcia, ship store operator aboard USS Yorktown (CG 48).

“I’m there to make sure the customers have what they need while underway,” said Garcia. “In a way I think it helps boost the morale too.”

It’s Garcia’s job to ensure there are enough sports drinks and water in the chiller, and enough bars of soap and shampoo on the shelves to keep the crew clean and happy.

“I’m right here actually providing for the crew, and to me, I feel I’m helping them a lot more on a daily basis in my own way,” said Garcia. “It makes me feel good inside knowing I’m providing [for Sailor’s needs].”

With so many different people aboard this U.S. warship, there are bound to be some unhappy campers who aren’t pleased with the selection of goods on the shelves. But that doesn’t faze Garcia and his mission. He strives to make the crew happy as a whole, and if he can, stock the spe- cialty items for the smaller numbers who may desire such products.

“There are a lot of different individuals, and everyone wants different things, but we try to make everyone happy,” added the two and a half year veteran.

A look at the numbers will show that Garcia, who stocks everything from uniform items to breath mints, must be doing something right. His registers ring up more than $1,200 a day by selling more than 1,140 bottles of sports drinks and 200 peanut and caramel bars a week, among other things.

Now granted, it’s not your typical corner convenience store, where the hot dogs roll endlessly under the heat lamp until they petrify, and the “slushie” machine in the back dishes out over- sized cups of “blueberry mountain,” but for the most part, it gets the job done. Garcia is able to wake up in the morning knowing he is about to begin a day that will make the life of his ship- mates a little easier.

“I love my job and being able to provide for the crew,” said Garcia. “I like being able to inter- act with them on a daily basis.”

If It’s Broke, We’ll Fix It 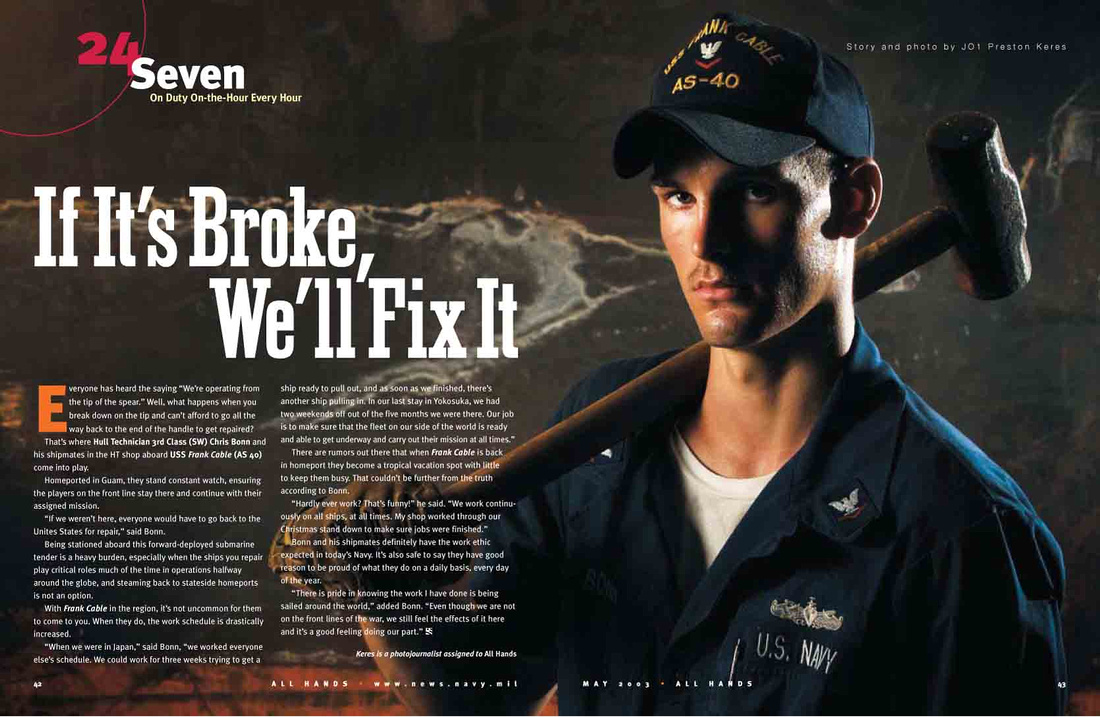 Everyone has heard the saying “We’re operation from the tip of the spear.” Well, what happens when you break down on the top and can’t afford to go all the way back to the end of the handle to get repaired?

That’s where Hull Technician 3rd Class (SW) Chris Bonn and his shipmates in the HT shop aboard USS Frank Cable (AS 40) come into play.

Hopeaported in Guam, they stand constant watch, ensuring the players on the front line stay there and continue with their assigned mission.

“If we weren’t here, everyone would have to go back to the United States for repair,” said Bonn.

Being stationed aboard this forward deployed submarine tender is a heavy burden, especially when the ships you repair play critical roles much of the time in operations halfway around the globe, and streaming back to stateside homeports is not an option.

With Frank Cable in the region, it’s not uncommon for them to come to you. When they do, the work schedule is drastically increased.

“When we were in Japan,” said Bonn, “ we worked everyone else’s schedule. We could work for three weeks trying to get a ship ready to pull out, and as soon as we finished, there’s another ship pulling in. In our last stay in Yokosuka, we had two weekends off out of the five months we were there. Our job is to make sure that the fleet on out side of the world is ready and able to get underway and carry out their mission at all times.”

There are rumors out there that when Frank Cable is back in homeport they become a tropical vacation spot with little to keep them busy. That couldn’t be further from the truth according to Bonn.

“Hardly ever work? That’s funny!” he said. “We work continuously on all ships, at all times. My shop worked through our Christmas stand down to make sure jobs were finished.”

Bonn and his shipmates definitely have the work ethic expected in today’s Navy. It’s also safe to say they have good reason to be proud of what they do on a daily basis, every day of the year.

“There is pride in knowing the work I have done is being sailed around the world,” added Bonn. “Even though we are not on the front lines of the war, we still feel the effects of it here and it’s a good feeling doing our part.” 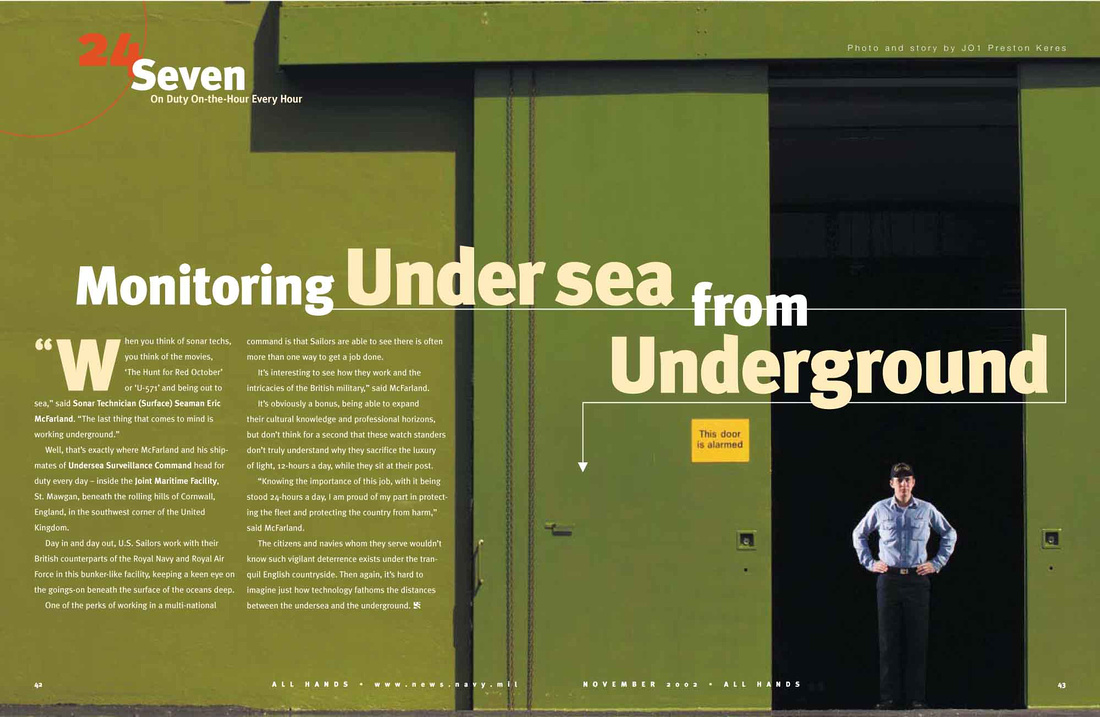 “When you think of sonar techs, you think of the movies, ‘The Hunt for Red October’ or ‘U-571’ and being out to sea,” said Sonar Technician (Surface) Seaman Eric McFarland. “The last thing that comes to mind is working underground.”

Well, that’s exactly where McFarland and his ship- mates of Undersea Surveillance Command head for duty every day – inside the Joint Maritime Facility, St. Mawgan, beneath the rolling hills of Cornwall, England, in the southwest corner of the United Kingdom.

Day in and day out, U.S. Sailors work with their British counterparts of the Royal Navy and Royal Air Force in this bunker-like facility, keeping a keen eye on the goings-on beneath the surface of the oceans deep.

One of the perks of working in a multi-national command is that Sailors are able to see there is often more than one way to get a job done.

It’s interesting to see how they work and the intricacies of the British military,” said McFarland.

It’s obviously a bonus, being able to expand their cultural knowledge and professional horizons, but don’t think for a second that these watch standers don’t truly understand why they sacrifice the luxury  of light, 12-hours a day, while they sit at their post.

“Knowing the importance of this job, with it being stood 24-hours a day, I am proud of my part in protect- ing the fleet and protecting the country from harm,” said McFarland.

The citizens and navies whom they serve wouldn’t know such vigilant deterrence exists under the tran- quil English countryside. Then again, it’s hard to imagine just how technology fathoms the distances between the undersea and the underground.

Keeping Her Head in the Clouds 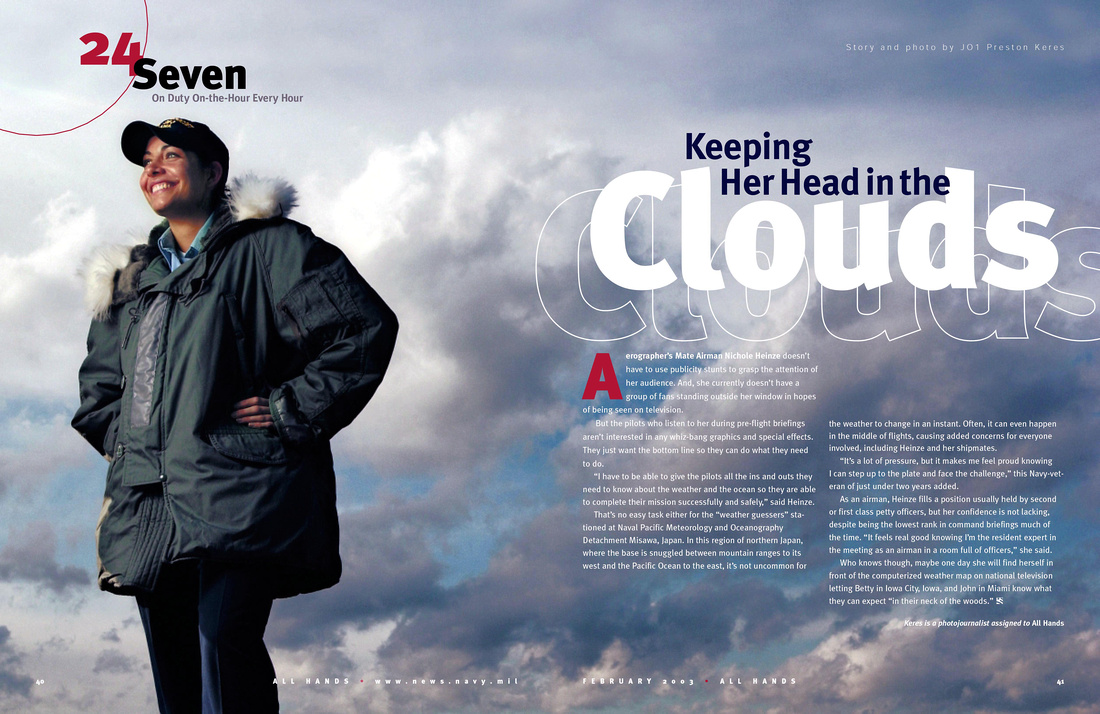 Aerographer’s Mate Airman Nichole Heinze doesn’t have to use publicity stunts to grasp the attention of her audience. And, she currently doesn’t have a group of fans standing outside her window in hopes of being seen on television like the infamous Al Roker.

But the pilots who listen to her during pre-flight briefings aren’t interested in any whiz-bang graphics and special effects. They just want the bottom line so they can do what they need to do.

“I have to be able to give the pilots all the ins and outs they need to know about the weather and the ocean so they are able to complete their mission successfully and safely,” said Heinze.

That’s no easy task either for the “weather guessers” stationed at Naval Pacific Meteorology and Oceanography Detachment Misawa, Japan. In this region of northern Japan, where the base is snuggled between mountain ranges to its west and the Pacific Ocean to the east, it’s not uncommon for the weather to change in an instant. Often, it can even happen in the middle of flights, causing added concerns for everyone involved, including Heinze and her shipmates.

“It’s a lot of pressure, but it makes me feel proud knowing I can step up to the plate and face the challenge,” this Navy-veteran of just under two years added.

As an airman, Heinze fills a position usually held by second or first class petty officers, but her confidence is not lacking, despite being the lowest rank in command briefings much of the time. “It feels real good knowing I’m the resident expert in the meeting as an airman in a room full of officers,” she said.

Who knows though, maybe one day she will find herself in front of the computerized weather map on national television letting Betty in Iowa City, Iowa, and John in Miami know what they can expect “in their neck of the woods.”